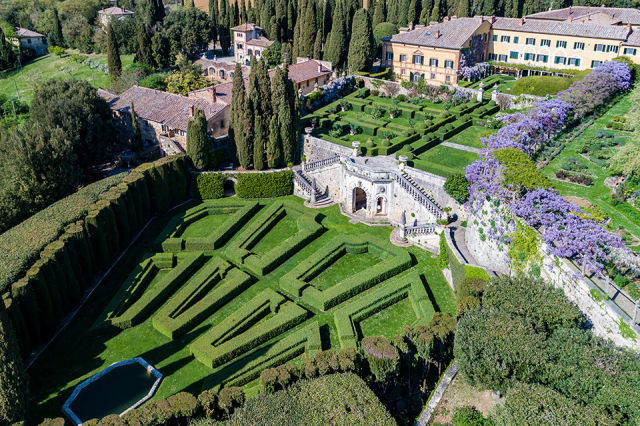 Between Chianciano Terme and Cassia the undulating and harmonious hills of the Val d’Orcia return to meet with the most rugged gullies of the Crete. Here, on the crossroads where the roads to Pienza, Montepulciano, Sarteano and Chianciano converged and still converge, there is a place where the history of this part of Tuscany intertwines with that of a refined woman, attentive witness of her time and capable of give us posterity a lovely garden, an example of great harmony and pure beauty: this place is called La Foce, this woman is Iris Origo.

Il Giardino la Foce is located inside the homonymous estate, founded in 1498 by the Santa Maria della Scala Hospital of Siena as a hostel to host pilgrims who went to Rome along the Via Francigena. The hostel remained for a long time in the hands of the powerful Spedale di Siena until the confiscation of many ecclesiastical assets occurred under Pietro Leopoldo di Lorena and in 1924 the estate was bought by the Marquises Antonio and Iris Origo.

In the guided tour we talk about Iris, a writer born of an Irish mother and an American father, who as a child was taken by her mother to live in Florence to enjoy the international atmosphere of which the city was permeated at the time. After the wedding with the Marquis Origo, a lover of country life, Iris decided to live in the Foce and make it both a home for her and her family and a chance to improve the lives of the poor farmers in the area, through the reclamation work the inhospitable Val d’Orcia and the foundation of a sanatorium for children with tuberculosis.

The story of Iris winds between the ’20s and’ 30s, along with that of his garden, designed with great skill by the architect Pinsent that she had seen at work at Villa Medici in Florence, bought right by her mother when she was a child. The garden is characterized by carefully boxed hedges and laurel, fountains, basins and benches, walls and travertine benches: the first garden, the lemon garden, the rose garden and the lower garden lead to appreciate the great skills of the architect, who has been able to exploit the morphology of the land and embed this precious place in the splendid scenery of the Val d’Orcia. The view of Monte Amiata from the terrace of the Giardino dei Limoni is breathtaking, but really: the perfect integration between the human and the natural landscape makes you literally remain speechless.

The story of Iris continues through fascism, war, bombing, partisan struggles and Nazi occupation. It looks like a novel, the compelling storyline of a film that, surrounded by the splendor of the garden, one would like to hear again and again.

A visit to the Garden is an immersion in the history of the Tuscan land and the Val d’Orcia and in its profound beauty, both natural and man-made: an example of perfect integration between the environment and the human hand.

La Foce Garden is open from the end of March to the beginning of November with guided tours every Wednesday at 3:00 pm, 4:00 pm, 5:00 pm and 6:00 pm, every Saturday, every Sunday and national holidays with visits starting at 11:30, 15:00 and 16:30. Instead it will remain closed for private events. The admission fee of € 10.00 includes a guided tour lasting about 45 minutes. More information on the website www.lafoce.com