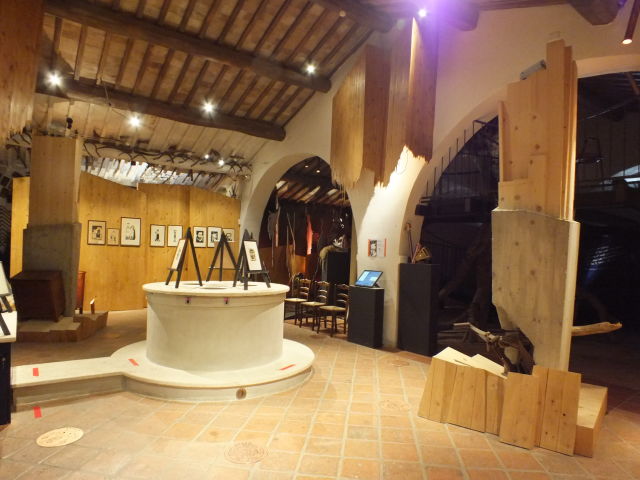 Tepotratos is the name of the Monticchiello Poor Theater museum. A name which sounds fascinating and mysterious, like something out of ancient Greek. In fact it is a simple acronym which stands for TEatro POpolare TRAdizionale TOScano: that is, ‘Traditional Tuscan Popular Theatre’. But you will find that it still contains fascinating and mysterious things, in a rich display which is something like a stage set. Tepotratos is in fact not an ‘ordinary’ museum composed of exhibits, glass cases and inscriptions to read. On the contrary, it’s organised to stimulate the emotions, a journey for the visitor involving highly evocative sounds, voices and visions.

We present here a succession of scenes and images from Tuscan traditional theatre. We have learned a lot from them; but most of all we want to pay homage to the civilisation of peasant sharecroppers—to their entertainments; to the pure simple world of their popular poetry; to their merry subversive tales of a ‘world upside down’, which often secretly expressed their wish for a society which would be more just, open and inclusive.

Tepotratos is also a space which we use for temporary exhibitions, concerts, workshops and entertainments. A simple viewing of the museum’s permanent display costs nothing. To set up an interactive multi-media visit, you need to give at least a week’s notice to our office, by telephoning (+39) 0578 75 51 18, or emailing info@teatropovero.it

You can also visit the museum’s website, www.tepotratos.it, for more information.